Redemption of the Season

The holiday season is busy. Understatement, right. Even for those of us who have cut back on the schedule, there still seems to be a pressure that hangs in the air. Do more, buy more, be more. Even though I shopped early, set my boundaries, and planned my calendar, I’m still feeling overwhelmed.

My goal was to be able to enjoy the Christmas season. But here I am: a heavy heart, full of anxiety, and once again just feeling like I’m not enough. Feeling like I’ve done something wrong. I didn’t give enough attention to my kids, enough time to relationships, enough stuff to the people on my shopping lists.

I know in my head that this is not what the Christmas season is about. But my heart hurts, none the less. I feel like I’ve made too many mistakes. Maybe next year will be better, so I’ll just count this as one of the down, not so great years. I’ll just survive these next few weeks until life returns to “normal” because it’s too late to redeem this season.

That’s exactly what Christmas is about though. Redemption. Redeeming all that was wrong, all that was distant, all that was lost. Over 2000 years ago redemption came in the form of a tiny baby. God showed His love and mercy over and over again to His people, His holy set-apart chosen people. Yet again and again they chose their own ways, formed their own idols, followed the people of their own choosing. Even still, God loved His people. He wanted to dwell with them. He established covenants making promises to His people and dwelled among them in the Holy of Holies. The people still rejected Him over and over again. Yet He still wanted to be even closer. He wanted to live with His people, so He sent a piece of Himself to this Earth. Not to condemn people and set them apart from Himself, but to restore the distance.   To not only tell us but to show us how great His love is. To offer the final sacrifice for our disobedience, not to call out our disobedience, but to restore us from it. To redeem us. To buy us back from our lives of complacency apart from Him.

I’m going to put my focus there for the next few weeks. This season isn’t about me, what I do, or who I feel I’ve let down. For me, it’s about rediscovering the joy and wonder of that act long ago. Redemption, come to earth, to save even me. 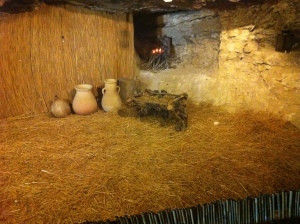 Living in the JOY of Family Ministry